Skip to content
By jwillsMarch 24, 2021Leave a Comment on Brad Paisley, Scotty McCreery, Jake Owen Swing for the Fences for Kids

Brad Paisley posted, “My friend and Los Angeles Dodgers slugger Chris Taylor put together a live concert HOME RUN FOR HOPE on March 26 from 8pm – 10pm! It’s going to be an evening of ALL-STAR ENTERTAINMENT to benefit kids with cancer. Sit back and enjoy a night of SPECIAL UNPLUGGED music right from our living rooms. PERFORMANCES by me, Jake Owen, Scotty McCreery, D. Vincent Williams, Shy Carter and MORE! Hosted by Chris, World Champion and all! Don’t be late to the dugout and miss this INCREDIBLE EVENT! 100% OF ALL PROCEEDS to benefit Children’s Hospital for the King’s Daughters and the Roc Solid Foundation charities. Tickets ON SALE NOW at HomeRunforHope.com“ 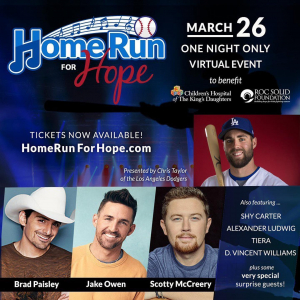 This article was originally published on TheCountryDaily.com.